The Spartaco Society of Reading was founded in the last century by a group of seven men who induced others to associate themselves together to form a corporation to afford mutual aid and assistance to its members in case of sickness, injury or misfortune; to extend assistance, advice and charitable aid to such worthy immigrants as may be deserving; for the purpose of lending support to civic enterprises; and to provide social enjoyment and recreation to its members.

On May 20, 1899, the Spartaco Society was granted a certificate of incorporation by the Berks County Courts, thus becoming the first Italian-American fraternal organization in the county.  Berks County Courthouse records indicate that the legal charter-name of the society was “The Societa Spartaco, for Mutual Benefit, of Reading”.

Boyd’s City Directory of Reading for 1990 carried a notice in its miscellaneous societies and associations section that “Societa Sparatacus meets every Sunday of each month at 25 S. 6th  Street. Apparently, membership grew to the point where the officers had to secure a regular hall, which, in 1901, was in Rosenbaum’s Building, better known to most readers as the A.S. Beck shoe story building, southeast corner of 7th and Penn. I. Tadoro, secretary, reported that meetings were being held on the second and last Sundays of each month – a measure probably taken to contain rental costs.

The society disappeared from city directories until 1910 when it reappeared with the following entry: “Spartacus Itailian Society meets the first Sunday afternoon of each month at Harugari Hall; Dr. Ferdinando Colletti, secretary.” The headquarters remained in Harugari Hall until around 1914; thereafter, meetings were held in Breneiser Hall, at the northeast corner of 8th and Penn streets, until the Society purchased its own home.

IN 1914 Matteo G. Albert was elected president and the Society’s fortunes soon changed appreciably. Albert was a notary public and steamship agent living and working at 349 S. 7th St. He was a man described as “a substantial and upright citizen, a mover.” When Albert accepted the presidency, he promised to establish a home for the society within three years – in spite of the fact there was only $1,200 in the treasury and membership had stagnated at around 105 members.

As good as his word, a former church structure at 407-409 Chestnut Street was purchased in 1916 for $12,000  and renovated immediately.  This venerable building had been erected by the Baptists, who used it from 1865 to 1898.  Thereafter, it was occupied by the First Christian congregation, who worshipped here until the building was bought by the Spartaco Society.

Incidentally, between 1914 and 1916, Albert increased the Spartaco’s financial standing to $3,400 and all but doubled the membership to around 200. 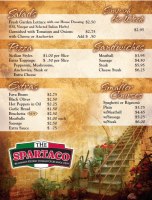